12 hours walk (with performative works) through Copenhagen and suburbs – initiated by Metropolis, in collaboration with Copenhagen Contemporary

Silas Inoue’s praxis is based on an idiosyncratic approach to nature and humanity – and how these concepts are deeply intertwined. The exhibition eat & becʘ̃me deals with the state of dependence between humans, and the provisions that nature provides us with. A physical necessity, that is cultivated by man, and today has become a symbolic phrase: you become, what you eat.

In his work with drawing, sculpture and installation, Inoue combines analytical world observations with intuitive and imaginative expressions. The sculptural works often contain food products, and touch upon themes such as evolution, future ecologies, technologies and infrastructures. He describes the style as quasi-Asian, referring to his own part eastern part western origin.

On the occasion of the exhibition, Inoue has thought about the nutritional aspects of his practice, as well as how consumption correlates with becoming. The exhibition deals with the contemporary paradigm of growth and the fragility of ecosystems. Together with drawings of hyper-exotic gourmet dishes, Inoue builds up an atmosphere around some kind of modern vanitas motives, emerging from thoughts about growth and decay in a globalized world.

The work series Infrastructure can be seen as an analogy to the increase of population in the metropolises. The inner compositions resemble imaginary cityscapes, inhabited by bacteria and viruses, together with hundreds of different fungal species, and limited by the acrylic glass tanks that hermetically surround them. Their myceliumfibers give rise to millions of fungal spores, like individuals in a microcosm. On top of the tanks, bronze respiratory systems are placed, which by means of filters add air to the organisms, while preventing the spores and mycotoxins from entering the outside space. Similarly to the infrastructure of society and the human body, the works submit themselves to the microbes living inside them.

A similar kind of microculture is at stake in the work SymbioSoup. This is a combined sculptural and performative work, whose title points to the theory of symbiogenesis. Symbiogenesis literally means becoming by living together, and refers to the pivotal role, that symbiosis have played in the evolution of life. The work comes about in the social gathering that evolves around a pot of soup, served at the exhibition opening. Here, the guests are encouraged to donate the leftovers in their soup bowl to the sculpture. The purpose is that the individual bacterial flora of each guest will collectively form unpredictable colonies, reproducing and growing throughout the exhibition period.

In the Future Friture series, large quantities of sugar are melted into a hard candy mass, subsequently used as sculptural material, and sunken into cooking oil. The sculptural works represent the Hydra-organism, as well as the small jellyfish Turritopsis Dohrnii, whose rather special life cycle consists in regenerating itself. Still, this particular ability is a scientific area of interest, and the work also refers to our constant yearning for immortality. The cooking oil preserves the sugar sculptures – but also points out the duality, that lies in the continuance of the oil and sugar, in relation to their degenerative effects on the human body.

The human diet is connected to our evolutionary advance. Way back when we went from subsisting on vegetables to eating meat, we developed bigger brains, and later, when we learned how to prepare food under heating, we developed the cognitive capacities that we have today. At the same time, our culture around food has become concurrent for how we progress, on an individual, health-related level as well as in a longer, evolutionary perspective. The way in which we produce, distribute and consume food products is decisive for what kind of world we create.

The exhibition is realized with support from The Danish Art Foundation 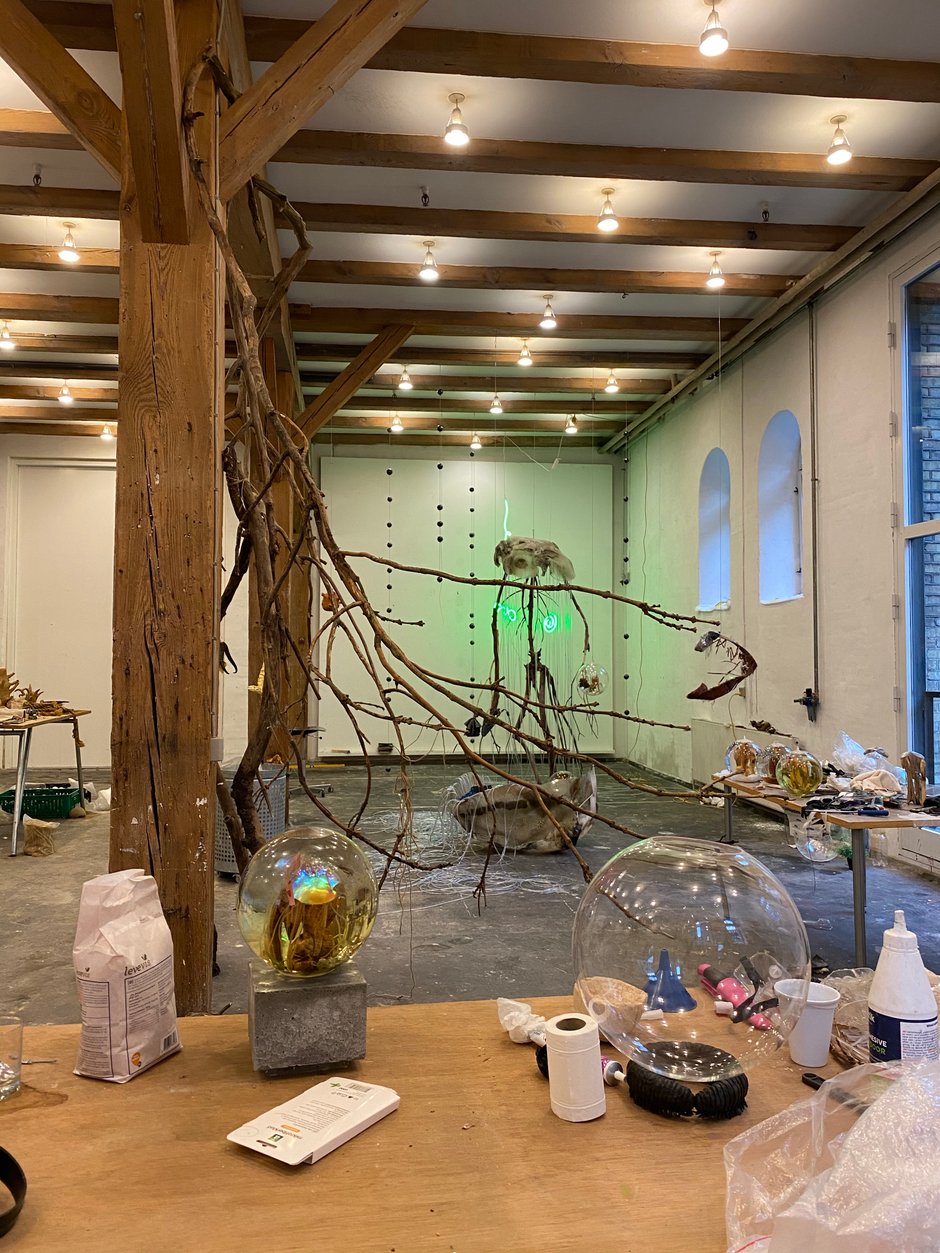 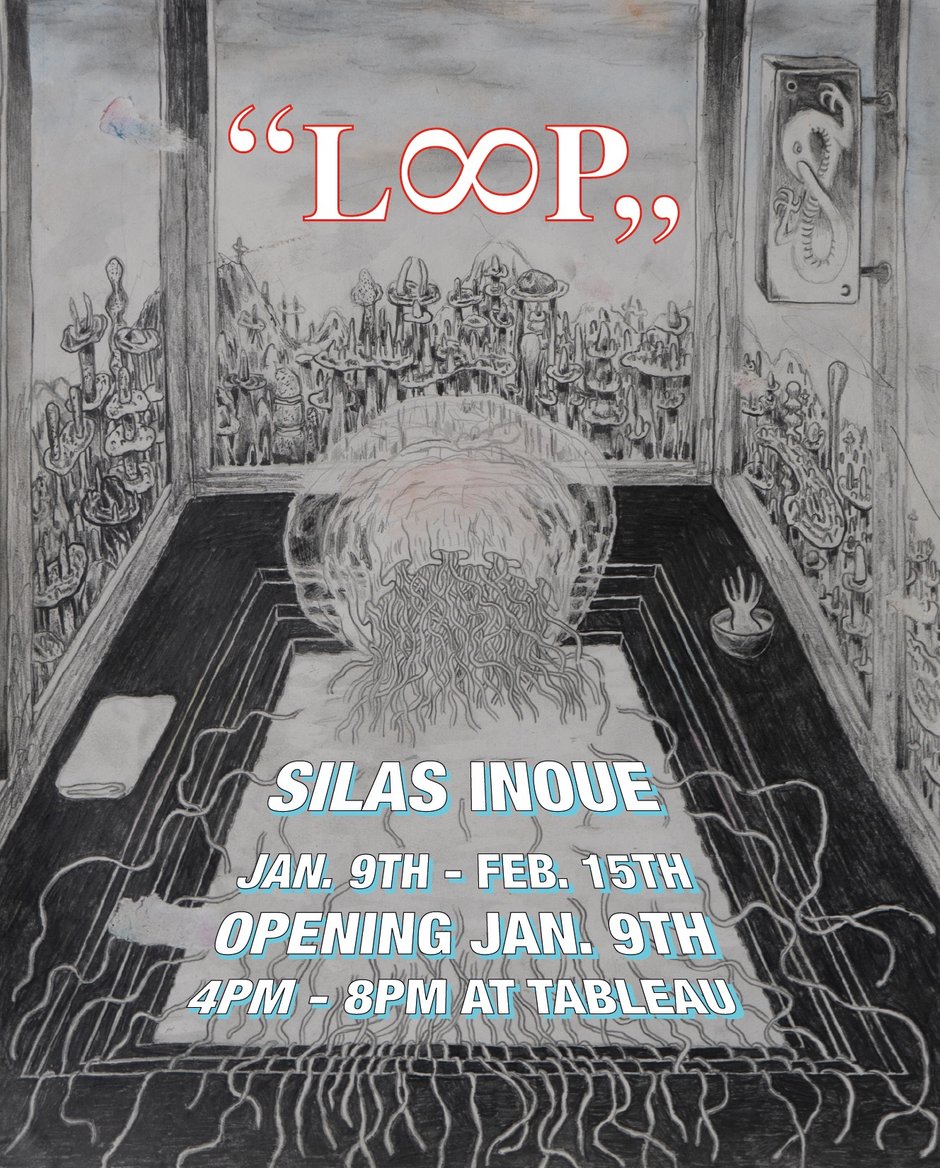 Silas Inoue´s exhibition l∞p at TABLEAU presents a sticky, yet mesmerizing aesthetic of immortality, situated in an undetermined stage between biology, technology and religion.

For a long time, the idea of immortality has occupied man – ever since the earliest religions, to the present day, where rapidly growing technologies make prospects of eternal life seem plausible. Influenced by our yearnings and fears of the infinite, the exhibition wavers between bliss and existential claustrophobia. Sugar-made organisms as well as disassembled computers are sunken into cooking oil, and animated deities intertwine with TABLEAU’s ritualistic flower arrangements, specifically made for the exhibition.

TABLEAU and Silas Inoue both incorporate in their work the concept of life and growing organisms. Working with flowers is ephemeral while Inoue’s focuses on the concept of immortality. In that way, the artist’s work and TABLEAU’s universe resonate.

Inoue’s Future Friture series depicts enlarged miniature organisms such as the freshwater Cnidarian ‘Hydra’ and the jellyfish ‘Turritopsis dohrnii’. While the first inhabits temperate and tropical regions over the world, the second lives in the Mediterranean and Japanese sea. In nature, these organisms have a rather special life cycle; they revert into an immature state only to grow old again later on in a continuous process. This alternation between old and young is making them somehow immortal – a phenomenon which for long has occupied researchers in the field of regeneration studies.

In the video work World Pop Drummer, a demonic creature is beating the drum in an irregular rhythm. The animation is WiFi-connected, and the rhythm is actually based on a statistical estimate of the increasing world population, calculated by deducting the birthrate from the significantly lower death rate. This means that every drumbeat represents an additional human life on the planet. Thus, the work draws rhythmic attention to a rapidly growing world population, and a resource scarcity that opposes the individual's desire for immortality.

It is speculated that, sometime in the future, eternal life can be achieved in a virtual world by uploading the consciousness into the cloud. The video work Forever Friture animates such a digital afterlife. A disassembled computer sunken into cooking oil (similar to the technology used by datacenters to save energy) is used as media player for an eternal upward movement into the skies, referencing both religious ideas of the afterlife and cloud computing.

Inoue's work is based on an idiosyncratic approach to nature and humanity – concepts that he considers inseparable. In his drawings, videos, sculptures and installations, he combines analytical observations of the world with intuition and figments of imagination. He describes the style as “quasi-Asian”, with reference to his half eastern and half western origin. The concept of l∞p is according to Inoue “like a snake eating its own tail – a fantasy of self-preservation in the age of ecological collapse and pending catastrophes.”

The exhibition is supported by: Grosserer L.F. Foghts Fond, The Danish Arts Foundation, and The Council for Visual Artists for the City of Copenhagen